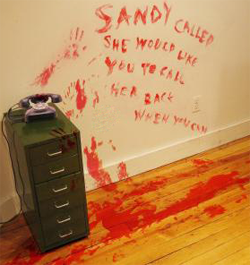 Post-Its from nightmare land.
Kryten: The poor devil must've scrawled it in his death throes, using a combination of his own blood and even his own intestines.
Rimmer: Who would do that?
Lister: Someone who badly needed a pen.
— Red Dwarf, "Psirens"
Advertisement:

Maybe pen and paper weren't available. Maybe that just wouldn't be cool/creepy/dramatic/funny enough. This is a trope for writing with unusual equipment.

A particularly common (and gruesome) version is a victim of a murder or monster attack to use the last of their blood and strength to write a Dying Clue. Also the blood will often be immune to oxidization, remaining bright red no matter how long. There may be Bloody Handprints nearby as well. May cross with Blood-Stained Letter as well.

See Also: Distress Call, Room Full of Crazy and Deal with the Devil, all of which use or overlap with this trope to some extent. Sister trope to Condensation Clue and Carved Mark. If blood was specifically used to make a signature more significant, it's a Blood Oath.

Painting pictures this way just seems natural when you're a blood mage!

Alternative Title(s): Write With Anything Handy, Writing In Blood

Painting pictures this way just seems natural when you're a blood mage!