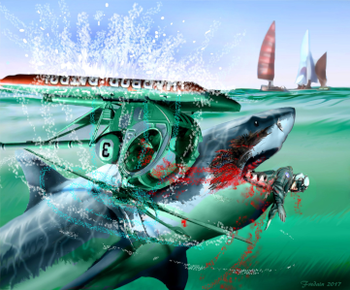 Painting by Federico Alain.
Ellis: Nick, what the hell, you shot the pilot!
Nick: Well he wasn't doing a very good job once he became a zombie, now, was he?
— Left 4 Dead 2
Advertisement:

One of the most likely casualties in an action or disaster story is the nameless extra who operates a vehicle for the heroes. Whether it's pilots dying in plane crashes (which the main characters miraculously survive), chauffeurs getting shot or blown up, boats' pilots drowning, or Sword and Sandal chariot-drivers being trampled to paste by galloping hooves, a character whose role is purely one of providing transportation is many writers' first choice to bite the dust.

This trope is, in part, a way to weed out superfluous minor characters once they've served their purpose, as well as an easy excuse to show off how deadly the heroes' situation is, while also cutting off a potential escape route. Can lead to a Crash Course Landing if the death happens before the journey's end. If a Disposable Pilot actually has lines, or even a name, then expect some form of Retirony to accompany their dramatically-convenient demise. If they survive their brush with death to return as a recurring character, they'll evolve into The Driver instead.

Actual pilots encountering the Big Bad while flying the plane have a tendency to try asking "If you kill me, who's going to fly the plane?" This usually prompts the villain to reveal they can in fact fly a plane, and the pilot is dead meat.

Occasionally applied to characters who actually matter to the plot, so sometimes rates as a Death Trope. If the vehicle's operator is killed while the vehicle is in motion, causing the vehicle to go out of control at speed and ramping up the tension, that's Dead Foot Leadfoot.

Not to be confused with Failed Pilot Episode.