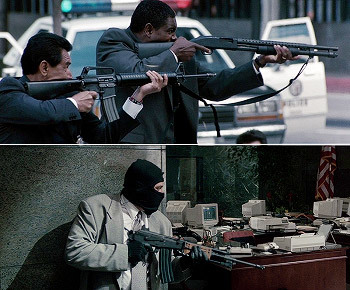 Cops And Robbers has never been this serious.
Advertisement:

Some general traits commonly differentiate the two types of guns. "Good Guns" are often Boring, but Practical, or at best Simple, yet Awesome, compared to "Bad Guns" which are often flashier, bigger, have higher capacity/a greater rate of fire, and/or dual wielded. Conservation of Ninjutsu and Imperial Stormtrooper Marksmanship Academy often play into this — Since "Good Guys" are typically more individually competent, one way to make "Bad Guys" more threatening is to give them better guns. Thus, a single hero with a simple pistol is still threatened by a dozen incompetent Mooks with assault rifles, but can take them down without stretching disbelief too much. This idea also escalates — if the "Good Guy" has an assault rifle, the "Bad Guy" will have a Grenade Launcher. If the "Good Guy" has the grenade launcher, the "Bad Guy" will a Rail Gun.

Specific types, models, and families of firearm that often fall into these classifications can be found in the folders below. Please note, these aren't intended to capture every possible specific model of firearm that may qualify, but to capture broader categories from which these guns are pulled.

This certainly isn't an exhaustive list (nor is intended to be) and there are many, many models of firearm around the world that do not neatly fit within this binary. Some "Good Guns" in one time period may evolve into "Bad Guns" or vice versa. For example, the futuristic-looking Steyr AUG was made famous by the villains in Die Hard, but variants have since been adopted by law enforcement throughout the world in the decades since and have become more often depicted as "good"; alternately, see the Tommy Gun, which went from a gangster's weapon that made the '20s roar to a heroic weapon during World War II. Others may vary depending on the nature of the work in question. For example, it isn't uncommon to see an Anti-Hero using a traditional "Bad Gun". Similarly, while More Dakka may otherwise be a "Bad Gun" trait, having your hero pick up a Gatling Gun designed to be fired while mounted can be downright awesome. Conversely, a Dirty Cop may use a standard-issue "Good Gun" for nefarious purposes.

As with all morality tropes, No Real Life Examples, Please!