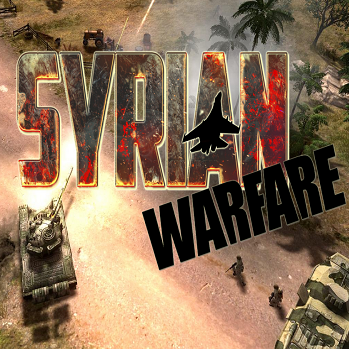 Syrian Warfare (known as Сирия: Русская Буря; i.e. Syria: Russian Storm in the creators' language) is a Real-Time Strategy game, created by the Russian developer Cats Who Play, and released for PC through Steam on February 21st, 2017.
Advertisement:

It is on a modified version of the Warfare and Warfare Reloaded game engine.

The main storyline is told from the perspective of Anwar Amin, who used to be a lieutenant in the Syrian police force at a small town before the civil war broke out. The conflict still hasn't reached his town at the start of the narrative; he even says it merely felt like "something happening on the other side of the TV screen" and was even able to take a leave abroad. Right after he returns, however, the terrorists finally reach his town and murder the police chief with the aid of the police chief the next town over, who has turned traitor. Nevertheless, he is able to mount effective resistance and hold on for a while. From then on, the story follows his squad's involvement in the war's crucial battlefields, both when they were on their own and after the Russian air force had started intervening in their favour.

By the end of 2017, the game also received a short downloadable campaign, Return to Palmyra, devoted to the battles around the titular ancient city, which was famously liberated from the Islamic State in 2016, then lost, and then retaken again within a year. A year later, it had also received Battlefields DLC, which included both additional missions and the Level Editor allowing the players to create their own scenarios.

Since this is a work with a clear political positioning, remember about Rule of Cautious Editing Judgement when writing about anything not directly mentioned in the narrative.