America Takes Over the World 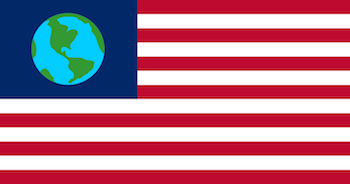 "My fellow Earthicans..."
"We're an empire now, and when we act we create our own reality. And while you're studying that reality, we'll act again, creating other new realities, which you can study too, and that's how things will sort out. We're history's actors … and you, all of you, will be left to study what we do."
— Karl Rove (chief advisor to George W. Bush)
Advertisement:

The United States of America is capable not only of utilizing its long-range nuclear arsenal to devastate almost anyone anywhere at any time, but possibly also using ground forces to invade and occupy any country they can land on including China and India (although the experience of Vietnam should show that superior military hardware is no guarantee against a lower-tech foe with sheer numbers, determination, and significant foreign material aid). Given that the USA chews through about half the entire world's military spending on its own, it might still have this kind of power in forty years or so. Thus, a common conceit of sci-fi and some satire is for the USA to take over the world. Jokes about entire countries becoming the n+50th state are common. The recent economic shift in the new millennium will put this theory to the test. Since at least the 1980s, American culture has influenced other countries worldwide due to the rise of computers and the Internet, fast food joints (i.e. McDonald's) and Hollywood movies that use computer generated imagery (CGI) and special effects that are far more renowned than those found in another film industry. Americans including their high school and college students have a more advanced working knowledge of computer science than any other country. While its secondary school test scores are sometimes dismissed as average

, by upper income nation standards, it has a very high rate of tertiary education attainment

(even by upper income standards) and the best universities in the worldnote On the Shanghai Rankings, Times Higher Education Rankings, U.S. News and World Report Rankings, and Center For World University Rankings, the U.S. possesses around a quarter of the world's top 1,000 universities and the majority of the world's top 100, despite having less than 5% of the planet's population. and is considered to possess greater technology and better-access markets to commodities than any other nation. A strong plurality of the world's billionaires are Americans, with Amazon CEO and founder Jeff Bezos being the richest (although fluctuations in his company's value can make him swap ranks with Microsoft co-founder Bill Gates).