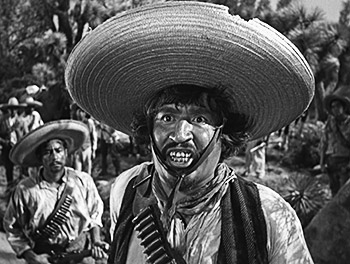 Caption? We don't need no steenking caption!
"If God didn't want them sheared he would not have made them sheep."
— Calvera, The Magnificent Seven (1960)
Advertisement:

A subset of the Outlaw with a Mexican flavor. Most often found in stories set in Mexico or near the border.

Stereotypically, the bandito has a thick Mexican accent, wears a sombrero and poncho or serape, and in later time periods a bandolier of ammunition. A thick mustache is common, but not mandatory. Many Banditos are designed after the real-life Bandito and Revolutionary general Pancho Villa.

Usually the villains of a Western, but if portrayed sympathetically will have a Robin Hood code of honor, or be revolutionaries fighting against the corrupt government.

As with the outlaw, the bandito often overlaps with The Gunslinger and Cowboy roles, with the latter being called vaqueros. A bandito might also use a knife or lariat and is often Trigger-Happy. Sombrero Equals Mexican usually applies to banditos.

Note that bandito is the English spelling. In Spanish it is bandido. In a similar case, we get desperado from the Spanish desesperado.