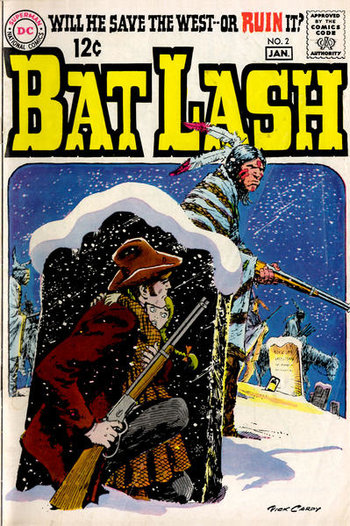 Bartholomew "Bat" Aloysius Lash is a Western character in the DC Universe. A self-professed pacifist, self-professed ladies' man, and Professional Gambler, Bat Lash's adventures have been published by DC Comics since 1968.

In 1968, Carmine Infantino, newly installed editorial director of DC Comics, and his editor, Joe Orlando, came up with the name and basic premise of the loner whose family had been wiped out by murderous thugs, and then brought in former DC editor Sheldon Mayer and Sergio Aragonés to further flesh out the concept. Shelly Mayer would write the first appearance (Showcase #76). Infantino claimed to have greatly rewritten it. The assignment was then handed to Aragonés, with Denny O'Neil doing the dialogue over Aragonés' plots, and Nick Cardy providing the art.

Bat Lash's own series only lasted seven issues. Bat Lash made several other appearances after his cancellation in issues of Weird Western Tales and other titles. He had a story in DC Special Series #16 and a brief backup series in Jonah Hex #49 & 51-52 in 1981. A 1998 mini-series, Guns Of The Dragon set in 1927 China, teams an elderly Bat Lash with Biff Bradley and Enemy Ace on an adventure that sends them to Dinosaur Island. In 2008, Bat Lash appeared in a self-titled, six issue mini-series from DC, written by Aragones, with dialog by acclaimed western novelist Peter Brandvold, art by John Severin and covers by Walt Simonson. It was reprinted in trade paperback as Bat Lash: Guns and Roses in 2008.

Bartholomew Lash was the son of Texan farmers, Lemuel and Martha Lash. Martha raised Bart to be a well-spoken and intelligent individual, but his hard-working father preferred to see his son grow up to appreciate the solid efforts of a good day's labor. Taking cues from both of them, Bart grew into the sort of unconventional individual neither parent could have predicted.

As Bart grew older, he demonstrated an apathetic attitude towards violence, preferring instead a life of pure self-indulgence. He was always well mannered and well groomed, and even took to fastening a flower inside of the band of his hat.

Soon after however, Bart's life took a darker turn. Corrupt county officials had swindled the Lashes out of their farmland forcing them to vacate. While Lemuel, Martha and Bart's siblings sought shelter elsewhere, Bart went to the authorities. His efforts to seek justice failed however, and he earned himself the enmity of a corrupt Sheriff's office. An argument ensued – one which led to a duel between Bart and a local deputy. Unable to talk himself out of the affair, Bart was forced to gun the officer down.

Lash soon found himself a fugitive from justice. Wanted by the authorities, he sought refuge in a small cabin that his family had taken as shelter. However when he arrived, he found that the building had been put to the torch. Both Lemuel and Martha Lash died in the blaze. He gathered his surviving friends and family and brought them to the sanctuary of a convent. From that moment onward, Bart (now calling himself Bat) sought to avenge the deaths of his parents.

Do not mistake for English indie singer Bat for Lashes.

Tropes associated with Bat Lash include: