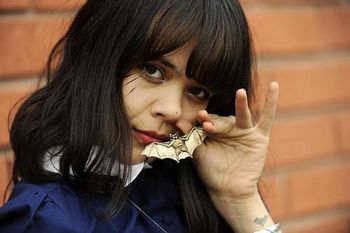 "Went over the sea
What did I find?"
Advertisement:

Bat for Lashes is not a band, but the stage name of Natasha Khan (born 25 October 1979), a critically praised English musician of Pakistani descent. She plays multiple instruments including the piano, the harpsichord and the autoharp. She also has a background in the visual arts, which shows in her elaborate shamanic costumes and sets. Her work has been described as "mystical indie pop", with its lush, ethereal soundscapes and lyrics that are, uh, mystical. Her first album, Fur and Gold, was more earthy and insular in its instrumentation and her second album, Two Suns, features more electronic influences. Her third album, " The Haunted Man" shows a significantly altered, more minimalistic and arguably mature style that earned her very good ratings.