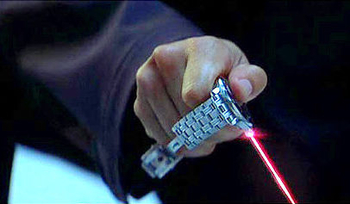 It also tells time.
"All historians agree that George Washington's greatest regret was not being PERMANENTLY INVISIBLE. Now you can succeed where the man who invented America failed. Be invisible forever with the Cloak and Dagger Spy Watch!"
— The Cloak and Dagger

There's something cool about wrists and devices on them. Wristwatches are cool. Wristwatches that call your special friend are even cooler.

In fiction, a bracelet is never just a bracelet and a watch never just tells time. They serve some sort of function. Sometimes, multiple functions. They unlock doors, teleport you places, and create miniature harpoons. They're the super Swiss army knife of wrist wear.

Oh, and sometimes they even tell the time.

Often a result of Where Does He Get All Those Wonderful Toys? Can be used as part of a Non-Uniform Uniform. A subtrope of Shoe Phone and Super Wrist-Gadget. See also Magical Accessory for other tricked out trinkets. Compare Billionaire Wristband, which serves the function of signifying how rich its wearer is.