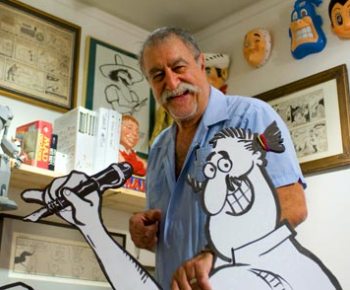 Sergio Aragonés Domenech (born September 6, 1937) is an American cartoonist, originally born in Spain and raised in Mexico, best known for two things: his prolific contributions to MAD; and the comic book Groo the Wanderer, which he created, draws, and co-writes with Mark Evanier.

Many have claimed that Sergio is the fastest cartoonist in the world today, a skill he demonstrates with sketches at his live appearances. He has been honored with every major award in the field of comic-book art, including the National Cartoonists Society's Reuben Award and the Will Eisner Hall of Fame. Unfortunately, he's also getting on in years and he's had to slow down his production to a small degree.

Tropes exhibited by Sergio and/or his works include: