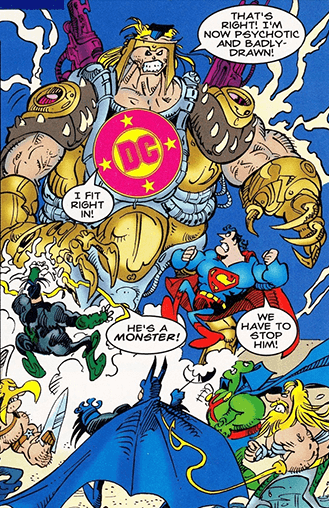 A new Johnny DC for The Dark Age of Comic Books
Valor: Who is trying to kill us?
Hawkman: I cannot tell you! I cannot tell you because it is too horrible! (And also because Sergio hasn't figured out that part yet!)

Sergio Aragonés destroys DC is a parody of characters from DC comics, written by Sergio Aragonés. As if you couldn't guess it yourself...

One day, Sergio Aragonés grew tired of writing at the sides of MAD: it's about time he begins to write about big superheroes! First, Superman. Origin story, and Superman saves a kid, destroying his cape in the process, just because it's cool. And then Hawkman cries about a terrible villain coming to destroy them. Then, Batman: Origin story, Batman punishes a random criminal for information about a costumed vigilante that punishes criminals, Gordon sends him against the Joker, and Superman and Hawkman come to request his aid. Then, Wonder Woman: fighting something worse than an invasion of barbarians or gods: a ruling from the Supreme Court that rules that it is not constitutional to forbid the entry to the island based on sex. Hankman tries as well to request the help of the Legion of Super-Heroes, who reject him because he's in the wrong time period.

So, all the big heroes met at some random planet, and try to figure out who is the villain. Sergio Aragonés stops writing for a moment, he did not think about the villain yet. He takes some old magazines, and selects the most terrible one: Johnny DC!

Johnny tells the heroes that they have changed and now they suck, and so he gets "updated for the nineties" and tries to destroy them. Batman tricks him into saying his name backwards, and he dissapears.

What a great story! Or so thinks Sergio. He's kicked out of DC's premises, and the big chiefs tell a kid to get rid of those pathetic drawings. But he understood it wrong, and sent them for printing. The printers find it a bit strange, but surely it must be something for the Vertigo line. DC wouldn't request 300,000 printed copies of the wrong comic book, right?