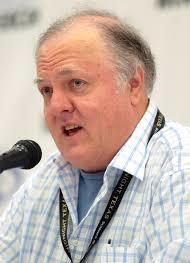 His early television work was mostly in sitcoms, including Welcome Back, Kotter, on which he was a story editor, but he is better known as a writer (and sometimes voice director) of animated series, including Garfield and Friends (of which he wrote nearly every episode), The Garfield Show, Dungeons & Dragons (1983) (which he helped develop and wrote the pilot episode of), Thundarr the Barbarian, and Scooby-Doo.

For the latter, he had the unenviable job of writing the episode that introduced the infamous Scrappy-Doo. Relating the episode's history in a series of articles called Scrappy Days

, he argues that Scrappy's hatred is mostly a modern phenomenon, and at the time, the character actually helped keep the show on the air.

In comics he is the co-writer (with Sergio Aragonés) of Groo the Wanderer, and co-creator of The DNAgents and Crossfire. He has written a well-regarded run on Blackhawk. He wrote Looney Tunes and other licensed funny cartoon comics for Gold Key Comics. In his early years in comics, he worked as a production assistant for Jack Kirby, of whom he has published a biography.

Evanier writes a popular blog entitled News From ME

. His website is chock full of bits of show biz and comic history often not documented anywhere else. Particularly of Jack Kirby (his mentor) whom he wrote an exhaustive book about, and the classic comedy It's a Mad, Mad, Mad, Mad World (he had a hand in the recent releases restoration). He's also an unabashed fan of the late June Foray, whom he cast in several of his shows, was partly responsible for her first Emmy nomination, and even organized her public memorial just two months after she died.

Additionally, he often posts obits of a lot of lesser known comic creators and Hollywood actors, writer and producers that often get completely overlooked in the mainstream. Sadly, his obits were so good and so frequent as The Golden Age population began dying out, his website has often been mis-identified as an "Obituary Site." For this reason, he is in high demand to host panels at San Diego Comic Con, especially relating to the Golden Age of comics. He hosts well over a dozen every year.