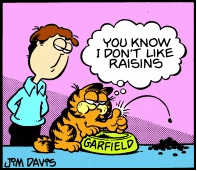 When a food is said to be loathed by someone to the point of characterization. It's basically the Inverted Trope of Trademark Favorite Food.

Not to be confused with I Do Not Like Green Eggs and Ham, which is about someone refusing something (not necessarily food) that they assume they'd dislike. Also has nothing to do with junk e-mail (which many of us quite justifiably despise).note The use of "spam" to describe junk e-mail is actually indirectly derived from the Monty Python sketch, though the term had been in use among amateur radio operators for undesired communications beforehand.

Sometimes these will fall under Stock "Yuck!", turned Up to Eleven for one person. Otherwise, expect something either so universally loved that no-one understands their problem, or so rarely encountered that you wonder how they manage to build up such a hatred of it. A common hated food is fruit cake.

Sometimes, an Extreme Omnivore will have just that one item they don't like, and this trope will be played for laughs. In this case, it's usually something very mundane, so that while a character might be willing to eat disgusting and probably poisonous mixtures, they absolutely refuse to eat something everyone else enjoys.

(Ironically, although Spam is an acquired taste for most people, it still has its fans and is very popular in much of the Pacific, particularly Hawaii and South Korea.)

See also Picky Eater, Kids Hate Vegetables, Bizarre Taste in Food, and Only One Who Likes Spam. May result in requests to Hold the Unsolicited Ingredient. Related is Enmity with an Object.

Has nothing to do with hating Spammers, Beam Spam or Grenade Spam.

D.W. takes issue with just about all of the greens in her salad except for lettuce. Then she finds out that her lettuce is spinach, which she REALLY hates. That's when things really kick off.

D.W. takes issue with just about all of the greens in her salad except for lettuce. Then she finds out that her lettuce is spinach, which she REALLY hates. That's when things really kick off.