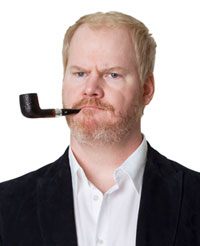 "I look this way because my father was from Sweden and my mother was Elton John."

James Christopher Gaffigan (born July 7, 1966 in Elgin, Illinois) is an American comedian who appeared in various commercials and films before rising to national popularity in the late 2000s. Gaffigan released his first comedy album, Luigi's Doghouse, in 2001. His first four albums were released on small independent labels; his first major-label release was Doing My Time, released on Comedy Central Records, who would release all his albums going forward, usually accompanied by a TV special and/or DVD release. His 2006 release, Beyond the Pale, would be his commercial breakthrough, and remains probably his best-known performance. In 2015, he began starring in the TV Land sitcom The Jim Gaffigan Show, playing a fictionalized version of himself, and voicing Father Time in Star vs. the Forces of Evil.

Gaffigan's routines commonly focus on aspects of everyday life, the most prominent of which are eating and being lazy. Gaffigan also includes frequent high-pitched, stage whispered asides, meant to represent a hypothetical, easily-offended audience member. (Rumor has it that these are based on his sister-in-law's reactions.) These were a fixture of his act for a long time, though beginning with Mr. Universe, he's cut down on their usage significantly.