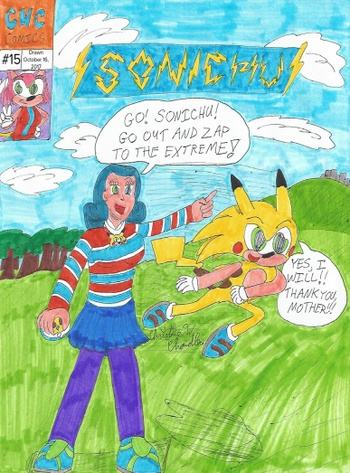 The cover of Issue #15, a retelling of the Issue #0.
Advertisement:

Sonichu started as some sort of Pokémon/Sonic the Hedgehog crossover world, and the first few issues focus on Sonichu's origin, his meeting with his "heartsweet" Rosechu (based heavily on Amy Rose), and a supporting cast of other Hedgehog Pokémon of various types. But in issue #2 and from issues #4-7, the series crystallizes into its present form, as Chris-Chan takes center stage, standing her ground against, among others, evil mall cops, a malevolent witch, and internet trolls.