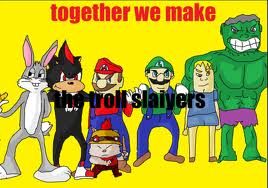 What can be said about Tails Gets Trolled?

Well, it's a crossover webcomic consisting of a multitude of characters from various media, made by a DeviantArtist called lazerbot in 2011, with later involvement by his brother Embergram. The comic starts out simple: a group of trolls start to harass Tails, forcing him to go to his friends for help. Sonic suggests trying to reason with the trolls, but Shadow insists that violence is the only answer. Soon enough, shit goes down and Shadow decides to create "The Troll Slaiyers", a group of people dedicated to killing all trolls... and from there, things spiral completely out of control.

The comic is currently available on deviantART here

. An audio adaptation is currently being recorded as well

. Be warned that it gets pretty violent (and, in later chapters, sexual) and consequently should probably be considered Not Safe for Work.

Tropes represented in this series include: