Explaining Your Power to the Enemy 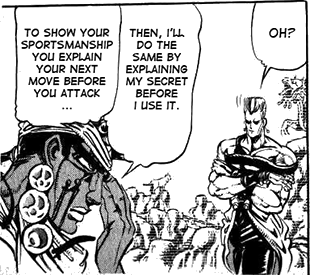 It's only fair, right?
Baron von Helsingard: I see not only through the senses built into my own armor, but those of my every soldier.
Atomic Robo: You know what I've always liked about you, Helsie? You keep telling me how to beat you!
— Atomic Robo and the Fightin' Scientists of Tesladyne
Advertisement:

It's no surprise that villains love to gloat, but this gloating isn't necessarily limited to villains, or even explaining secret plans — sometimes a character (usually one with special powers) will take a time-out during combat to explain for their opponent's (and the audience's) benefit exactly how their powers work, even if leaving said abilities a mystery would give them a strategic or tactical advantage in the fight.

Sometimes this Info Dump is because the character is confident that their opponent doesn't actually pose a threat, so they can afford to spend time chatting about what they're going to do next. Sometimes it's a way to psych out the enemy, letting them know how utterly screwed they are. Or maybe they don't realize they're being Genre Blind (or they do, but don't care).

In less serious examples, the explanation may extend from merely how their powers work to exactly what can counteract and defeat them.

This is sometimes related to Viewers Are Morons, and can also be used as an Exposition for a character the viewer has never seen before. It is very commonly found in shonen titles, where it is not uncommon for the character to explain their powers repeatedly, even after it's been established how those powers work.

Also a subtrope of Inaction Sequence, with the extra bonus that the character is making a glaring mistake. Additionally, a close cousin to Luckily, My Powers Will Protect Me, but the person explaining their powers is doing it to the absolute LAST person they should be.

Contrast Power Misidentification and Fake Weakness, which may involve the power user lying about their powers.

For the record, Freakazoid's weakness is graphite bars charged with negative ions. And "poo gas". Then again, no one likes "poo gas".

Explanation of your powers ends up landing Kuroto Dan in trouble. He is able to make use of the limited invincibility provided by the Hyper Muteki Gashat... but ends up wasting it gloating over how it works to Masamune. Cue the timer running out and Masamune flattening him with a Pause.

Alternative Title(s): Explaining Your Powers To The Enemy

Explanation of your powers ends up landing Kuroto Dan in trouble. He is able to make use of the limited invincibility provided by the Hyper Muteki Gashat... but ends up wasting it gloating over how it works to Masamune. Cue the timer running out and Masamune flattening him with a Pause.