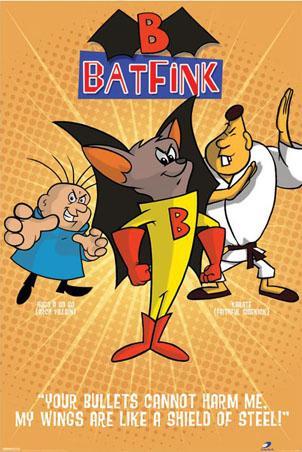 Batfink was created by Hal Seeger and is a parody of Batman and The Green Hornet, two shows which premiered a year earlier. Each episode consists of a five-minute short and the series had exactly 100 episodes.

Each episode follows the exploits of Batfink, an anthropomorphic superpowered bat with metallic wings and his bumbling human sidekick, the Capable Karate, as they protect their home city and battle various supervillains. Most episodes, it's their arch-nemesis, resident Mad Scientist Hugo A-Go-Go and his wacky schemes for world domination, while other episodes featured numerous others who were usually one-shots.

The show first aired in September 1967, but reruns were shown on the Nickelodeon show Weinerville in the 1990s, and on CBBC from 2004 to 2008 as segments on Dick & Dom in da Bungalow.