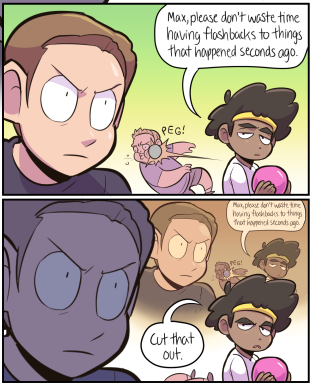 Naruto: Want me to have a flashback of what just happened 13 seconds ago?
Everyone: No!
Naruto: Aww...
— Naruto: The Abridged Series
Advertisement:

Sort of like how executives think Viewers Are Morons, they also think you have the memory of a goldfish, which, according to an incorrect urban legend, lasts about three seconds. Because remembering what happens over the course of a whole thirty minutes or, god forbid, an hour, is too difficult for your general media consumer, there is a handy little device called a Flashback that can be used to rewind, oh, five minutes or so to say, "Hey! This just happened, moron!" It may also come from an ancient survey that stated that Americans change the channel 20 times every minute on average.

With weekly television, there is a tendency to underestimate the audience. Arguably, this is the reason why network television has historically favored episodic storytelling over more serialized ones; the idea is that the episodes can be shown out of order and that viewers can just watch episodes at random with no need for context outside of the forty-five minute block. It's a bonus if shows like The A-Team explain their setup with a handy voice-over in the opening credits.

Sometimes a necessity in video game plots, due to the possibility of the player saving the game, taking a break of, say, two or three months, and then coming back, having forgotten important plot points during that time. In this case, the flashbacks will only seem insulting to the player's intelligence during a non-stop play. Some games try to avert this by putting plot summaries or scenes that otherwise show what has happened up to that point in the Loading Screen. Others have a character keep a diary which the player can read to remind themselves of the plot so far.

This may also be a justification depending on the format. Sometimes, book series will Call-Back to past events from the previous books when they were intended to be relatively standalone, or in case the viewer read the previous book, then went on to the next one a little while later. TV shows are often written around commercial breaks, to the extent that the first thing after the commercials is often a brief reminder of what happened just before the commercials—so when you view them on DVD or on a channel that does not use commercials (such as the BBC) the repetition seems odd. Serialized newspaper comics have to be written with the assumption that readers are likely to miss a day's installment once in a while. Even novels that were originally published in serialized chunks may seem oddly repetitive when finally printed as a single book.

Often this is an excuse for lots of Padding and Stock Footage, to reduce production costs.

Compare Fleeting Demographic Rule (where executives believe that they can recycle whole plots due to this short memory), Repeating Ad (where it's presumed viewers will not recall ads they saw in the same commercial break) and Recap Episode (where an entire episode functions as this for a series). For characters in-story with memory this bad, see Forgetful Jones.

By the way, this trope exists because executives think viewers are stupid. They also think you have the memory of a goldfish which lasts about three seconds. Only it really doesn't, as proved by the MythBusters.

And closer to fifteen seconds in the show itself. Not to mention that of course that was the exact thing they were arguing about. Making this also an in-universe example for Peter.

Real Life
This was an article about treating viewers like they have the memory of a goldfish which lasts about three seconds.