Film / House of the Dead 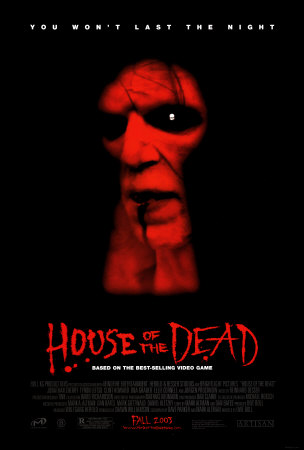 Shooting their heads is the key to everything.
Advertisement:

House of the Dead is a film adaptation of a popular light-gun game of the same name directed by Uwe Boll in 2003. It flung his name into video game movie infamy.

It follows a group of people going to a daylight rave held in ominiously named Isla Del Muerte* nevermind that the correct grammar would be "Isla de la Muerte" (Spanish for "Island of the Dead", no relation to that one, or that other one), who are then attacked by hordes of zombies. Gun smugglers, cops, and a hundreds-of-years-old undead Mad Scientist ex-priest are also involved.

A "Captain Kirk" joke early on, an explicit reference to George A. Romero, and seemingly randomly-inserted footage from the first three games indicate that the film may actually be a subtle and deliberate Self-Parody. Later a "Funny Version" of the film was released, which is a Recut consisting of goofy outtakes and sarcastic pop-up commentary.

The Funny Version provides the examples of:

A sea captain named Kirk has probably heard this joke many, many times.

Example of:
Never Heard That One Before

A sea captain named Kirk has probably heard this joke many, many times.