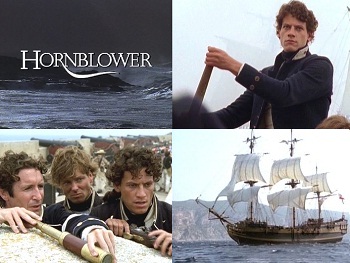 Wooden Ships and Iron Men. You will think Pirates are super lame after watching these Navy boys!
Advertisement:

Hornblower is the umbrella title of a series of television drama programmes based on C. S. Forester's novels about the fictional character Horatio Hornblower, a Royal Naval officer during the French Revolutionary Wars and the Napoleonic Wars. The miniseries, which ran from 1998 to 2003, stars Ioan Gruffudd in the title role and is produced by the British broadcaster Meridian Television, and shown on ITV in the UK and A&E in the US.

The series consists of eight made-for-television movies, which are notable for their high production values. In the US, the series was retitled Horatio Hornblower, and some of the episodes were known by different titles. The eight movies cover the events of just three novels (Mr. Midshipman Hornblower, Lieutenant Hornblower, and Hornblower and the Hotspur), and various alterations and additions are made to the source material.

Ioan Gruffudd has expressed a wish to continue with his portrayal of Horatio Hornblower and have Hornblower's entire life and career covered by one actor. He even attempted to bring the show to the silver screen, but so far, the project seems to be in Development Hell.

The episodes of the Mini Series:

Example of:
Enemy Eats Your Lunch