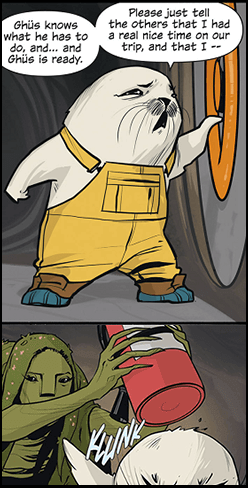 Jessica Rabbit: Oh, no! Where's Roger?
Eddie Valiant: Roger? He chickened out on me back at the studio.
Jessica Rabbit: No, he didn't. I hit him on the head with a frying pan and stuffed him in the trunk. So he wouldn't get hurt.
Eddie Valiant: Makes perfect sense.
— Who Framed Roger Rabbit
Advertisement:

Bob is about to do something that Charlie considers stupid — attempting a Heroic Sacrifice, becoming The Bait, or otherwise putting himself in danger. Charlie could try to reason with Bob and persuade him not to go, but he takes a much faster and more direct option.

He punches Bob in the jaw. (The gut and/or solar plexus are also popular areas.)

Nine times out of ten, this will put Bob out like a light, but even when it doesn't it still subdues him long enough for Charlie to take his place or forcibly remove him from danger. Bob may be cursing and raging (or even attempting to return the punch), but Charlie will brush him off and insist that he only did what he had to do.

A subtrope of Cruel to Be Kind, since this sort of treatment hurts, even if it saves Bob from worse. Since one hero attacking another looks really bad out of context, this is a common source of Superdickery.

See Kind Restraints for a softer version of this. Compare Percussive Shutdown when this tactic is used against an object rather than a character. Can result in Percussive Therapy if the recipient of the hit has been a source of frustration for the person doing the hitting. A common reason for this is that the character punching you out is More Expendable Than You. Compare Get Ahold Of Yourself Man, Dope Slap and Don't Say Such Stupid Things!.