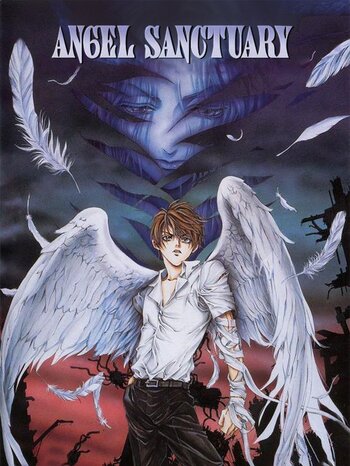 Angel Sanctuary is a shoujo manga by Kaori Yuki, which ran in Hana to Yume from 1994 to 2000. It also spawned a series of Drama CDs and a 3 episode OVA that was released in 2000.

Angel Alexiel rebelled against God. As punishment, her body and soul were separated, and her soul was cursed to rebirth into an endless loop of human incarnations. This is the story of her latest incarnation...

1999 in Tokyo. Setsuna Mudo, a high school boy, finds his life interrupted by angels and demons. Both Heaven and Hell seek Alexiel's soul, housed within him, but Setsuna has his own life, with his own problems. Not the least of which is the internal conflict of being in love with his biological sister, Sara.

In the struggle to awaken Alexiel's soul, Setsuna's life is threatened and Sara dies protecting him. The bulk of this story follows Setsuna's journey to find and rescue his sister's soul; travelling through the afterlife, through Hell and Heaven, with the help and hindrance of angels, demons and other mythical beings. Through this journey, Setsuna learns important lessons that help him become the hero and saviour that Alexiel wished she could have been.

This series delves into issues such as morality, destiny and social conformity, told through beautiful art and themes inspired by multiple religions and mythologies.