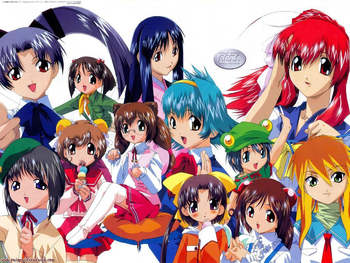 Angel Tales is an anime about Gorō Mutsumi, a young guy without much luck. Then one day a fortune teller enchants his cell phone and causes 12 of his deceased former pets/animals he encountered in childhood to appear in his room in the form of girls between the ages of 7 and 18, all calling him "master" and competing for his affections. That's...about it, really. It's worth a watch if you're into that sort of thing.

In the second season, the master-maid element is toned down, and becomes much more like a family drama. The girls try to be normal (at least as normal as possible given the circumstances) and magic is used much less. Also the characters receive a greater amount of character development.