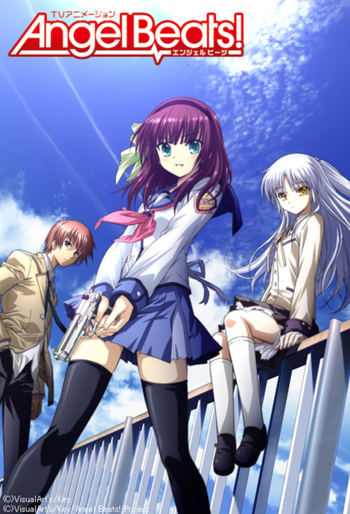 (From left) Otonashi, Yuri, and Angel.
I felt like I heard it
Because I felt like I sensed it
Just now, in my heart that has begun to tremble
I felt it come again
Some hundred million stars vanishing
I saw them off
Waved goodbye
And said "Good for you"
— "My Soul, Your Beats!" (Opening Theme)
Advertisement:

Angel Beats! is a franchise consisting of a thirteen-episode anime (plus two OVAs and a short epilogue), four manga, a Light Novel (adapted into one of the manga) and a Visual Novel by Key/Visual Arts. Jun Maeda, co-founder of Key/Visual Arts and scenario writer of many of the company's previous works, has conceived and written all of the installments in the series.

In the anime, simply entitled Angel Beats!, our viewpoint character, high-school-aged Otonashi wakes up suddenly to find that he can't remember anything, not even his full name. Before he even has time to get his bearings, a purple-haired girl with a sniper rifle informs him that he is dead and asks him to join her rebellion against God... but God is nowhere to be seen.

The world they are in seems like an enormous Japanese boarding school populated by soulless, though realistic and harmless, NPCs who act like ordinary students and faculty. The only apparent enemy of the self-named Shinda Sekai Sensen (Afterlife Battlefront) is the student council president, a short, white-haired girl they call Tenshi (Angel), who wields supernatural powers in an effort to force the SSS to behave like the normal students. Every real person who has submitted to this behavior has disappeared forever, so the SSS members are understandably unwilling. The Angel Beats! anime is the story of Otonashi's time in this strange afterlife, as he learns about his situation, interacts with the others in the SSS and Angel, waits to regain his memories, and decides what to do after he does.

The light novel serves as a prequel to the anime and follows the character Hinata and the formation of the SSS. Titled Angel Beats! Track Zero (November 2009-May 2010), it was written by Jun Maeda and illustrated by GotoP, and published by ASCII Media Works in Dengeki G's Magazine.

The anime, directed by Seiji Kishi for studio P. A. Works, began airing in Spring 2010. Included with the seventh and final BD/DVD volume was an OVA entitled "Stairway to Heaven" and a brief alternate ending entitled "Another Epilogue". A second OVA, "Hell's Kitchen", was released in June 2015. The OVAs take place between episodes 4 and 5 and episodes 2 and 3, respectively.

Another manga (May 2010 - October 2016) was published, adapting and continuing the story of the Track Zero Light Novel. This manga, Angel Beats! Heaven's Door, was illustrated by Yuriko Asami, and once again published by ASCII Media Works in Dengeki G's Magazine and, later, Dengeki G's Comic. Seven Seas Entertainment is releasing the manga in North America.

in 2017. Yuriko Asami returned as illustrator for the manga, which is described as the "True Angel Beats! [Maeda] wanted to write".

A six volume Visual Novel adaption exists and promises to feature more of the Angel Beats! universe that couldn't be crammed into the other works. Angel Beats! -1st beat-

, the first volume, was released on June 26, 2015 for Windows PC. The first volume covers up to the tenth episode of the anime as well as Yui's, Iwasawa's, and Matsushita's routes with Otonashi as the main protagonist. Subsequent volumes will cover the rest of the character routes.

The TV series is licensed by Sentai Filmworks for the North American release. No surprise, considering that they've picked up many Key titles in the past. The series was released with an English dub on DVD in July 2011. The first episodes were first shown at Anime Boston. Can be viewed

on the Anime Network and Crunchyroll.

For any character-related tropes, please see the characters page.