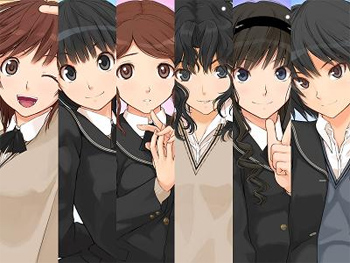 Amagami ("Gentle Bite" or "Nibble") is another dating simulation game by Enterbrain for the PlayStation 2. It was released in 2009, following the success of Kimikiss. Later received an Updated Re-release, EB Collection Plus Amagami, for the PS2 and PSP after multiple delays.

An anime, entitled Amagami SS was released in the summer of 2010, produced by AIC. Taking a cue from Kimikiss Various Heroines manga adaptation, Amagami SS used a very experimental omnibus approach: each girl gets 4 episodes centered entirely on them, with a continuity reset every time a new girl gets her turn. This is done so that all the girls have equal screen-time and all their fans will be satisfied. A second season, Amagami SS+ started airing in January 2012.

Our hero, Junichi Tachibana, has a problem. You see, a girl he liked stood him up on their date one Christmas Eve. He's been brooding about it for almost two years now, shutting himself in his own personal space (literally, with stars made with glow-in-the-dark markers) inside his closet. But besides that little quirk, he seems like your Ordinary High-School Student (read: incredibly perverted). That is until he gets to know one (or more) of six possible girls and gradually opens his heart up to her (or them). Will our Unlucky Everydude get a second chance to experience love once more? You be the judge!

An Anime First sequel, Seiren, set 9 years after the events of this series, started airing in January 2017.

No relation to the 2017 stealth game Aragami.