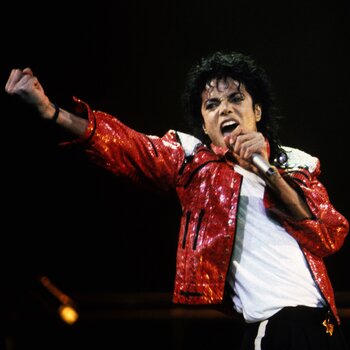 The King of Pop.
Influences:
Influenced:
Advertisement:
"What Michael Jackson has achieved is a tribute to twenty years of hard work, energy, tireless dedication, and a wealth of talent that keeps on growing. Your success is an American dream come true."
— President Ronald Reagan, The White House, May 15, 1984

Originally a member of the Motown act The Jackson 5, Michael Joseph Jackson (August 29, 1958 – June 25, 2009) debuted as a solo artist in 1971 — the year he turned thirteen. His full-fledged solo career took off in the late 1970s. Though songs from his first serious solo effort, Off the Wall (1979), were extremely popular, he reached unprecedented superstardom in 1982 with his album Thriller. Thriller is still the best-selling album of all time today, and won a total of 8 Grammy Awards.

Jackson was, perhaps, the definitive celebrity of The '80s. His singing voice and dance moves (especially his Signature Move, the Moonwalk Dance) gained iconic status. His unusually elaborate music videos were something of a Killer App for the emerging MTV. In particular, the one for "Thriller" is probably the most famous music video ever made. He had also been the first African-American artist to receive heavy rotation on the channel.note Actually when MTV started, it was all white. The directors of music programming explained, "MTV is supposed to be a rock channel, and it's hard to find black artists whose work fits that format." (Who do you think invented rock, dude?) "Well, we don't want to cater to fringe groups." Yep, being black makes you a fringe group. Meanwhile, Jackson had created two videos, for "Don't Stop 'Till You Get Enough" and "Billie Jean", which MTV wouldn't play until CBS threatened to yank all their other videos. By the end of the decade, he had another successful album in Bad (the first album to yield five number one singles on the Billboard charts), a direct-to-video movie and even video games.

As The '90s rolled around, Jackson had another success with the album Dangerous. However, within a few years media attention had turned on his health and appearance, his personal life and some allegations of sexual abuse against children. Although Jackson was either acquitted of most of these accusations, or otherwise not formally charged, he was Overshadowed by Controversy (or perhaps just eccentricity) for the remainder of his life, even after releasing two more albums. In 2009, he looked set for a comeback after booking a 50-show farewell concert engagement in London, England.

It was not to be. He died on June 25, 2009 due to an overdose of propofol (a hospital-grade anaesthetic) a few weeks before the first concert, at the age of 50. The doctor who administered the medication was later found guilty of involuntary manslaughter. Jackson's family sued tour organizer AEG for negligence but lost that case in 2013. Jackson's memorial service that July 7 was broadcast live around the world; he is interred in Forest Lawn Memorial Park Cemetery in Glendale, California. Later that year, the first of many posthumous Jackson-related projects, This Is It, compiled from rehearsal footage of the aborted London shows, was released. Shortly after his death, Jackson would see renewed critical and public popularity, though the child molestation accusations would still float around here and there in the public consciousness.

This would eventually culminate in the release of the 2019 Leaving Neverland, which went into detail about two new allegations against him. It was released with renewed interest. However, it was still incredibly controversial. Some public figures and fans heavily criticized and denounced the documentary, saying it was full of lies and factual errors. Regardless of its accuracy, Leaving Neverland prompted a second public reevaluation of Jackson's life and legacy.

Michael Jackson screams like a girl as he gets mauled by a dog off-screen.

Michael Jackson screams like a girl as he gets mauled by a dog off-screen.