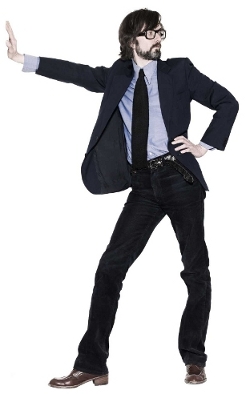 Jarvis Branson Cocker (born 19 September 1963) originates from Sheffield, South Yorkshire, though he now divides his time between London and Paris, and can best be described as a dryly witty, spindly-legged, tweed-jacketed dabbler in everything related to his passion for the arts. His most well-known and memorable foray has been into the world of music with Pulp and his solo career, where his catchy tunes and witty, observational style of lyric writing have garnered praise from critics and fans.

Jarvis was something of a misfit even in childhood. Raised by a bohemian mother who had been an art student before she became pregnant, his odd appearance and name often caused him to be teased by his peers. At the age of five, he contracted meningitis. Though he came through mostly unscathed, the disease damaged his eyesight – necessitating the wearing of thick glasses. He was never popular, but his sense of humour caused him to be generally well-liked.

From a young age, he had dreamed of becoming a pop star, though his unconventional charms and slow progress in learning to play the guitar seemed to indicate that the fame he craved would remain forever in his dreams. Then punk rock came along, catalysing his ambitions in earnest. In 1978, when he was 15, Jarvis started a band called Arabicus Pulp. After the excision of the first word of their name, years of struggling in obscurity, a hiatus (during which Jarvis got a degree in film-making at St Martins art college in London), and innumerable membership and stylistic changes, Pulp finally came into their own and became famous in the mid-90s. Fame was not kind to Jarvis and by the turn of the 21st century, he was recovering from drug addiction and dealing with the aftermath of nervous breakdown and general disillusionment with the nature of the music business

After the band went on hiatus in 2001 Jarvis, feeling that he was too old to be a pop star, decided to retire from performing. However, not long after this an electro duo called Relaxed Muscle emerged – and the singer and lyricist Darren Spooner looked and sounded suspiciously like our own Mr Cocker, despite his penchant for swearing, breaking bottles, and wearing elaborate makeup and costumes.

After finding that his dabblings in writing songs for film soundtracks and for other people (including Nancy Sinatra and Charlotte Gainsbourg) did not satisfy him, he returned to music in earnest, recording and releasing his first solo album, Jarvis, in 2006. The download-only single "Running the World", which was ostensibly about the negative impact of capitalism on morality among world leaders and people in power, was a slightly out of character moment for the mild-mannered Jarvis. This album was followed by 2009's "Further complications.", its louder and more rock-oriented brother, as well as continued collaboration with other bands and artists.

In 2010, Jarvis was given his own Sunday afternoon radio show on BBC 6Music – "Jarvis Cocker's Sunday Service". This sedate and low-key two hour show blends music, spoken-word recordings, and interviews with guests as well as promising to "put the boringness back into Sunday". He aired its final show on December 31, 2017.

After a hiatus from his solo career due to commitments with the Pulp reunion and his radio show, in 2017 he first released a collaboration with classical pianist Chilly Gonzales, Room 29, then formed a new band under the name "Jarv Is". Primarily a touring outfit performing Pulp material alongside Jarvis' solo work, they also performed several new songs, and in 2020 these songs were released on an album called Beyond The Pale.

No relation to the late Joe Cocker.

Jarvis Cocker and his various works provide examples of: