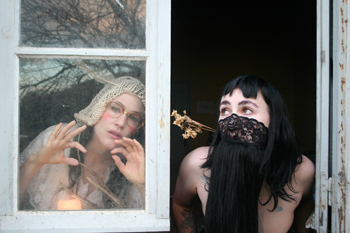 Sierra and Bianca Casady.
CocoRosie is a musical project consisting of the two Casady sisters, Sierra (Rosie) and Bianca (Coco). These were nicknames their mother gave them as children.

They were born and raised in America, and the stories of their childhood have something of a magical quality for fans. They recorded both a never-released hip-hop record, Word to the Crow, and their first album, La maison de mon rêve over the course of 2 months in the bathroom of Sierra's Paris apartment in 2003, after meeting for the first time in years. Since this time, the two sisters have been inseparable.

They are considered largely part of the freak-folk/new weird America movement, and their style varies with touches of blues, opera, pop, hip-hop, folk, electronica, and anything else you can think of. Sierra is classically trained in operatic vocal techniques, and sings while playing guitar, harp, and flute. Bianca is a percussionist, and also beatboxes as well as manipulating various children's toys which they use to create their unique sound.

The sisters and their music contains examples of: