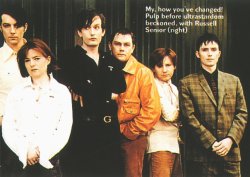 We don't look the same as you, we don't do the things you do, but we live round here too.note The Different Class-era lineup. L-R: Steve Mackey, Candida Doyle, Jarvis Cocker, Nick Banks, Mark Webber, and Russell Senior
"Please understand. We don't want no trouble. We just want the right to be different. That's all."
— Liner notes for Different Class
Advertisement:

Pulp are an Alternative Rock band which originally formed in Sheffield in 1978 as Arabicus Pulp - name mercifully shortened a year later - during lead singer Jarvis Cocker's school days. For all the band's longevity, they remained relatively under the radar during the first phase of their career. A tough young bunch that had been likened to The Fall, they remained largely unnoticed, though many reviewers (as well as DJ John Peel) were known to enjoy their music.

After Jarvis had an accident that resulted in multiple broken bones and several months in the hospital, he decided to start writing lyrics that more accurately documented ordinary lives. As more members were added and time ticked by, the band crept closer to the sound that would finally bring them fame and popularity. With the addition of Russell Senior and Candida Doyle, Pulp took a turn for the darker; recording the Post-Punk album Freaks, their 1987 release. In 1988 Jarvis went away to London to study at St Martins college – where he would catch the eye of Steve Mackey, who would become the band's bassist as they perfected their new "Eurodisco" sound. By the time Steve and Jarvis finished college, the band's lineup had stabilised, with Nick Banks having joined as drummer and Mark Webber playing with Pulp onstage. Their music gained favour as they came into their own stylistically with 1994's His 'n' Hers – just as the eighties-contrived term Britpop entered popular culture.

Then in 1995, after the greatly successful releases of the single "Common People" and album Different Class, as well as a performance at the Glastonbury Festival, Pulp achieved full penetration. Though they never quite eclipsed the ever-feuding Blur and Oasis in commercial popularity, they received heaps of critical adoration, most of it focusing on Jarvis' wry and witty lyrics. However, the morning after was not nearly so enjoyable for Jarvis. The backlash from his stage invasion during Michael Jackson's performance at the 1996 Brit Awards resulted in a night in jail and lots of attention... of the wrong kind. note  Though, when you actually watch the performance

, it's not hard to see why Jarvis invaded the stage. This, combined with the pressures of fame, resulted in his descent into a dark mental state. The followup album that Pulp were trying to piece together ended up taking more than a year to record due to Writer's Block – and when it was finished, This Is Hardcore sounded very different indeed.

After a short break, the band came back together to record what would be their last album, 2001's We Love Life, which was produced by Jarvis's long-time idol Scott Walker. The final blow that caused the band to go back on a seemingly-indefinite hiatus was the compilation album Hits doing far worse in the charts than expected. Jarvis went on to a solo career. In late 2010 Pulp announced that they would be reuniting summer 2011 to play festivals across Europe, including headlining shows at Reading and Leeds. Despite worries within the fanbase that this would be the last year Pulp would play live before going on hiatus yet again, the band toured again in 2012, culminating in a final gig in Sheffield, and the release of a newly-recorded version of 'After You' to fans as a digital download. Is this the end for Pulp? Only time will tell.

Although Jarvis is the only constant member, their best known line-up (and the one that reunited in 2011) consists of him (vocals), Russell Senior (guitar, violin), Mark Webber (guitar), Candida Doyle (keyboards), Steve Mackey (bass) and Nick Banks (drums).

"The tropes that 'Hello' leaves out":

What are you frightened of? (And remember - shove it in sideways)