What Did I Do Last Night? 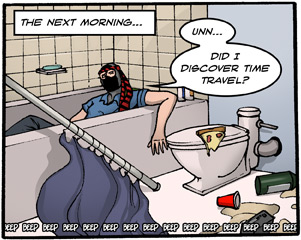 He didn't, by the way.
"Most people, on waking up, accelerate through a quick panicky pre-consciousness check-up: who am I, where am I, who is he/she, good god, why I am cuddling a policeman's helmet, what happened last night?"
— Witches Abroad
Advertisement:

A character wakes up in a strange location/situation/costume, unsure of how they got there.

Might be a Noodle Incident where not even the characters know or remember what happened. Often, but not always, involves drugs or alcohol. Strictly speaking, it doesn't have to be a night. It can be any alcohol- or drug-induced craziness plus memory block.

The character wakes up confused in a compromising position, and then utters in confusion: "What did I do last night?" As they learn more about what happened they repeat themselves, only this time in horror: "What did I DO last night?!" Often the episode becomes a quest to learn the truth. Usually, in comedy, it's a Not What It Looks Like situation, but in drama it often is what it looks like, resulting in a Wham Episode and an Aesop about not drinking. In Mystery Fiction, it's occasionally used to set up a Whodunnit where the protagonist himself has no alibi and may not be certain they did not, in fact, commit the crime.

Getting a tattoo or joining the Armed Forces is a common outcome, as is the ever-popular Bedmate Reveal. If they're in Las Vegas, an Accidental Marriage is likely.

This is a common romance comedy trope, sometimes used as a Ship Tease. For example, have two people end up in bed whom the fandom has been pairing up (despite their hating each other in canon). Have them freak at the thought that they might have had sex. Maybe have them sort of try out a "relationship" only for it to be "The Masochism Tango", but by the end of the day they figure out that no sex occurred, happily resulting in a Snap Back.

Another version can occur where everybody else does know what happened last night, but decide to conceal it so as to have some fun with the poor guy who can't remember. If the audience gets to see the poor drunk's patchy memories of the evening, they may be portrayed via Binge Montage.

See also Bedmate Reveal, Did They or Didn't They?, Undressing the Unconscious. Compare Alternate Identity Amnesia.

You Wake Up in a Room or The Murder After is a darker, less comedic variation. May overlap with Waking Up Elsewhere. A common aftereffect of a Wild Teen Party.

Can also be related to Missing Time, although this doesn't usually involve alcohol. Depending on the case, it can be Truth in Television, although the amount of alcohol you must consume to lead to Real Life memory loss is pretty close to how much you need to die from alcohol poisoning.

How did these examples get here?