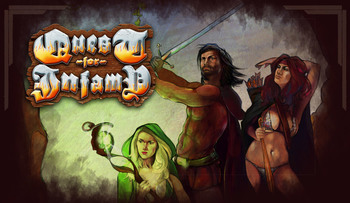 Quest for Infamy is an adventure/RPG and Spiritual Successor to the Quest for Glory series, developed by Infamous Quests and released in 2014. The game was funded through Kickstarter.

The player takes control of William Roehm, a roguish, sarcastic lech. After being caught in the chamber of a baron's daughter by her father, Roehm decides to flee the county, but when he is unable to make it further than the small, rustic of Volksville in the Valley of Krasna due to a Broken Bridge, he decides to stay for the time being and try to make a name and some money for himself. The player is then given the first task of seeking out a mentor that will train Roehm, which determine his class for the rest of the game, with the options being Brigand, Mage, and Rogue.

As Roehm explores Volksville and the surrounding areas, he soon discovers strange ongoings involving a local cult, and he finds himself embroiled in the events that are starting to unravel in the valley...