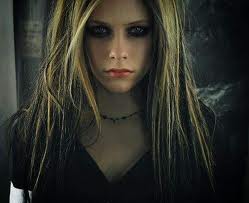 All this time you were pretending, so much for my happy ending...
Why do you have to go and make things so complicated?
I see the way you're
Acting like you're somebody else, gets me frustrated
And life's like this you
You fall and you crawl and you break and you take what you get and you turn it into
Honesty, you promised me I'm never gonna find you fake it
No, no, no
—"Complicated"
Advertisement:

She released her debut album, Let Go, in June of 2002 when she was seventeen. It went quadruple platinum. Her second album, Under My Skin came out in 2004 and The Best Damn Thing in 2007. All three were number one albums in the UK. All singles were well received. Goodbye Lullaby came out early 2011, but it did not match the success of its predecessors. Her self-titled album came out in 2013 to better reception. She returned to her Best Damn sound.

She's made cameo appearances in Sabrina the Teenage Witch and the film Going The Distance. She also played Beatrice Bell in The Flock and Alice in Fast-Food Nation. In Over the Hedge she voiced Heather.

She also designs the fashion line Abbey Dawn for Kohl's and has one fragrance, Black Star, out and another Forbidden Rose on the way.

Started dating Chad Kroeger from Nickelback at some point during the 2012 recording of her fifth album. The two were engaged on August 21, 2012, were married on July 1, 2013 and announced their separation in 2015.