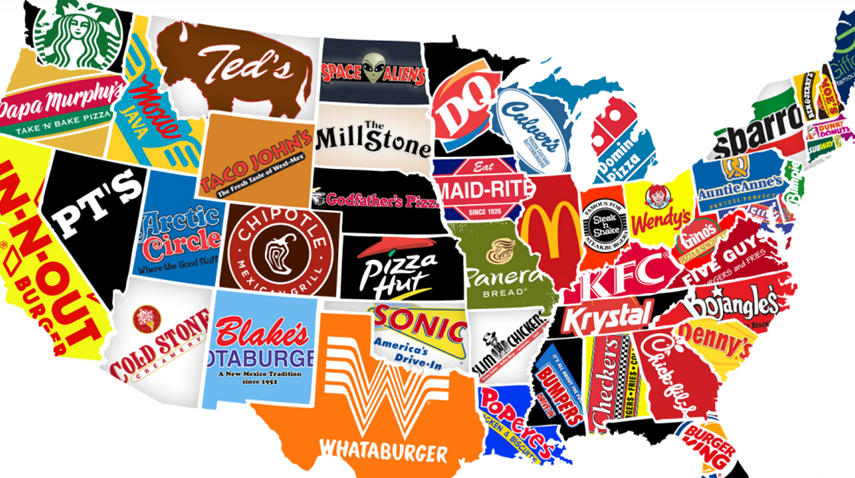 Fast food is a major part of the U.S.'s diet.

As befits a nation comprised of many different cultures, The United States sports a unique range of regional culinary traditions. This is true all over the country, from the massive cultural melting-pots of major cities like New York, Los Angeles, and Chicago to the small-but-proud traditions of the rural heartland. Most Americans are perfectly aware of this; they will practically come to blows arguing over which of the nation's many regional BBQ styles reigns supreme, what ingredients a bowl of chili should contain, or exactly what constitutes the perfect amount of spice on spicy chicken.

Likewise, many American culinary traditions are built on regional ingredients. Texans are bullish on beef while the Deep South is partial to pork. Coastal regions from Alaska to Florida sing of their seafood. Even the vaunted Cajun and Creole cuisines of Louisiana are based on foods located in and around the bayou, such as alligator, frog, and crawfish.

Not that you'd learn this from large swaths of the fiction we consume. When food is mentioned in many works, it tends to be from a pretty limited list of foods: hamburgers, hot dogs, pizza, fried chicken, Asian takeout — basically, stuff you would commonly get at a drive-thru restaurant. Granted, there are some narrative reasons for this: these are foods that everyone is familiar with and don't require a detailed explanation that might distract from the task at hand.

Sometimes, however, a creator will intentionally portray junky fast food as a major part — if not the majority or even entirety — of what Americans eat. They will deliberately dispose of the vast variety of vittles available in most any given region, and portray ridiculous Nutritional Nightmare Fuel as the only dishes desired by Americans. When this happens, America is being portrayed as a Fast-Food Nation.

For examples to count as this trope, the use of this stereotype must be deliberate. How deliberately this trope is used is generally evident from the way it's played. It's most likely unintentional if the characters' low-nutrient, high-calorie diet has no plot significance and makes no impact on their health or physique, much like a dietary version of "Friends" Rent Control. In more extreme, Anvilicious examples, typical Americans may be portrayed as morbidly obese, or actively dying because of their diets. The most extreme examples tend to be limited to political cartoons, works making a point about the evils of a junk food-based diet, and works attempting the "'Murica the Boorish" variant of Eagleland. If the latter, the engorged Americans are likely to be arrogant, obnoxious, and mean as well.

It's worth noting that there are some grains of truth in this trope. The idea that Americans eat too much fast food is indeed a stereotype that exists across the world, due in no small part to fast-food restaurants being one of the States' biggest cultural exports. There's also the fact that, on the whole, Americans do rely on fast and convenience food more than is ideal. However, the causes of that trend are much more complex than "Americans have no self-control." Many Americans' lifestyles have become so busy and fast-paced that fast food may be the only viable option for the amount of time available to eat. Fast food is also often cheaper, at least in the short term, than buying large quantities of fresh fruits and vegetables. This is why many of the heaviest consumers of fast food are in the lower income brackets.