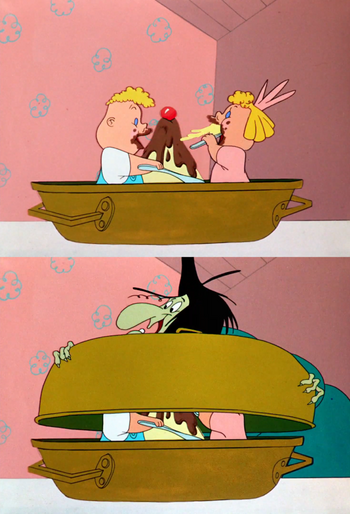 "You don't get it! They're fattening us up to eat us!"
— Reggie, Free Birds
Advertisement:

A character tries to fatten another character (or animal) like livestock, usually under the pretense of a friendly dinner or banquet in order for the latter to be big enough to eat or die of obesity. If the guest refuses to eat, the character might try Force Feeding them instead. This plan sometimes backfires as the designated "victim" might outsmart the character and cause them to fall into their own trap like getting pushed in an oven. Another variant for is when the victim convinces their captor to "fatten them up" first to bide time for an escape plan.

Related to I'm a Humanitarian and To Serve Man. Will often be followed by Cooking the Live Meal. See Weight Loss Horror for cases where losing weight is played horrifically.