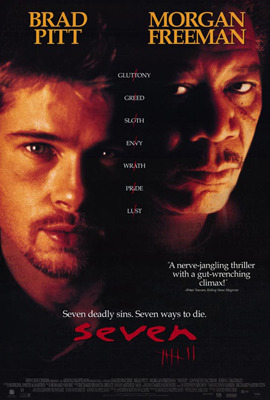 In an unnamed American metropolis where the crime rate is high and it is seemingly always raining, Somerset is about to retire and be replaced by Mills in the department, but the two get caught up in a string of horrible murders, each inspired by the Seven Deadly Sins and all caused by one intelligent and elusive Serial Killer. A distinctive dark atmosphere and a skillful balance of Gory Discretion Shots ends up creating a far more disturbing product than the Gorn films that try and emulate it.

A comic book series called Se7en published by Zenescope Entertainment tells the events of the movie from the viewpoint of the killer.

Released to both critical acclaim and commercial success, effectively resurrected Fincher's interest in filmmaking after the Troubled Production of his previous film, and is often ranked with The Silence of the Lambs and Psycho as the pinnacle of serial killer fiction.