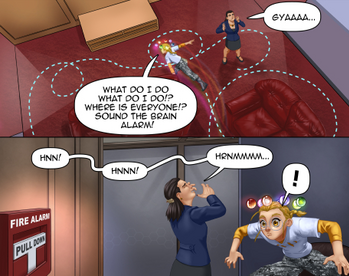 "Well, in any major city, minding your own business is a science. First thing they teach women in rape prevention is never cry for help. Always yell "fire". Nobody answers to "help". You holler "fire", they come running."
— Detective Somerset, Se7en
Advertisement:

Fire alarms, security systems, and other such means of alert are intended to be passive ways of letting people know that something's gone wrong, and are meant to signal that a specific kind of hazard is present. However, sometimes a character is in a bad spot and needs help, but has no active means to summon anyone. By deliberately tripping whatever alarm is available, they can broadcast their distress and (hopefully) count on whoever shows up to assist them.

Note that an alarm being tripped for its intended purpose, as a means of demonstration of function, or as a distraction for enemies doesn't count.