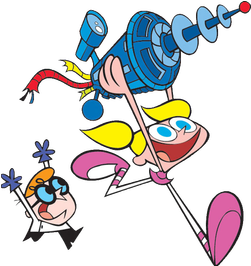 He skips grades. She just skips.
"Enter at your own peril,
past the bolted door
Where impossible things may happen
That the world's never seen before!"
Advertisement:

Cartoon Network's first original series that wasn't based on an already existing character or an anthology series. Dexter's Laboratory originated as creator Genndy Tartakovsky's thesis film, Changes and was later remade for the What A Cartoon! Show, a shorts showcase for Hanna-Barbera employees (The Powerpuff Girls was made under the same circumstances. Tartakovsky and Craig McCracken worked on both shows).

Dexter is a boy genius with an unplaceable Central European accent, thick-rimmed glasses and a gigantic secret laboratory in his bedroom. Yet for all his high intellect and scientific genius, Dexter is never able to keep his reckless older sister, Dee Dee, out of his lab. Dexter must also contend with threats from his Arch-Enemy Mandark, a rival boy genius who harbors an unrequited crush on Dee Dee.

This show follows a fairly standard "Three Shorts" format, with a Dexter cartoon at the start and end, and another series in between. Throughout its run, this slot was filled by spin-off series Dial M for Monkey and Justice Friends, both of these Super Hero parodies. Dial M for Monkey followed Dexter's eponymous pet monkey, who fought aliens and monsters behind Dexter's back. The Justice Friends provided a domestic sitcom take on The Avengers, exploring the apartment life shared by three superheroes who fight crime better than they get along as roommates. Outside the US the filler shows were sometimes dropped and the Dexter cartoons shown in a different order.

After running for two seasons, the series was given a TV Movie entitled Ego Trip, which was intended to serve as the Grand Finale. In spite of this, two more seasons were made without Genndy Tartakovsky's involvement (and without Dial M for Monkey or The Justice Friends, replacing them with segments focused on Dexter's supporting cast).

Do NOT confuse with that other Dexter; much tragedy will come of it. Well, some

per The Wiki Rule.

Ahh, what a fine day for troping!:

In Dexter's Laboratory...
Lives the smartest boy you've ever seen...
But Dee-Dee blows his experiments...
To smithereens!
There's doom and gloom...
When things go boom...
In Dexter's Laaaaaaaaaaab!
Feedback