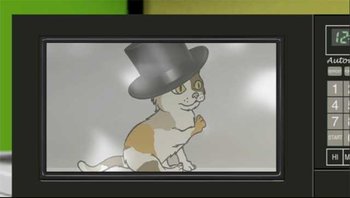 That's Shake's cat, by the way.
"ANGELINA! DO NOT MICROWAVE THE GOLDFISH!"
— Camillio babysitting his little sister, Detentionaire
Advertisement:

Someone killing a pet by putting it into a microwave oven and turning it on. The pet might explode as well.

A form of Microwave Misuse. This can be a case of Kick the Dog, or (as a popular Urban Legend has it

) just some misguided old lady or child trying to dry the pet out after it got wet. Has nothing to do with I Need to Go Iron My Dog. Not related to Eat the Dog either.

Please, Don't Try This at Home. You'll end up with a dead pet, a ton of grossness, and a broken microwave. And probably a lot of guilt on your conscience. And if anyone finds out, a lot of hate directed at you. Usually a Black Comedy Pet Death.

If the victim is a human being, it's Cooked to Death instead.

It's possible to steal Weird Ed's pet hamster, put it in the microwave, blow it up, and then show him its exploded corpse. He reacts accordingly.

It's possible to steal Weird Ed's pet hamster, put it in the microwave, blow it up, and then show him its exploded corpse. He reacts accordingly.