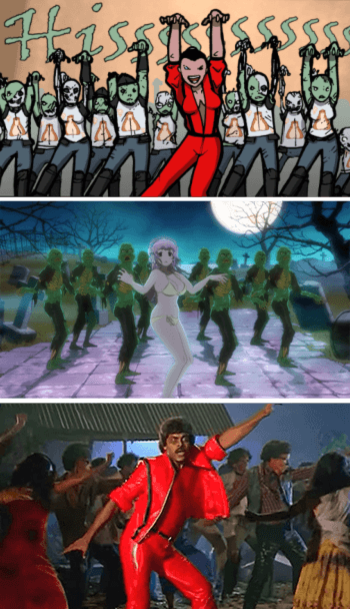 "You close your eyes / And hope that this is just an imitation"note Top to bottom: Erfworld, Super Sonico, the Tollywood movie Donga (specifically the "Golimar" number)
Michael Jackson's elaborate Music Video for "Thriller" debuted to much hype in 1983 and was an instant smash hit. As the most famous single video of all time, it's become a Stock Parody, usually referencing the "zombie dance" performed by Michael and a troupe of ghouls and/or the closing Or Was It a Dream? shot of Michael with evil yellow eyes. The red leather jacket Jackson wore in the video is also likely to turn up in such spoofs. In a series, this is often a part of a Halloween Episode.
Advertisement:

Mario dances with the zombie-like faceless Toads with the "Thrills At Night" track playing in order to draw out Hole Punch.

Mario dances with the zombie-like faceless Toads with the "Thrills At Night" track playing in order to draw out Hole Punch.