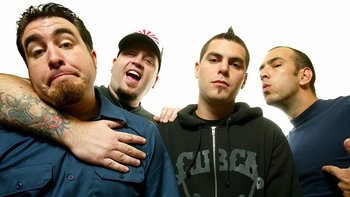 I want you to be free,
Don't worry about me,
And just like the movies,
We play out our last scene...
"Movies"
Advertisement:

Alien Ant Farm is an American rock band that formed in Riverside, California in 1996, best known for their cover of the Michael Jackson song "Smooth Criminal". Although initially grouped in with the nu metal movement of the late 90s and early 2000s, the band's sound also crosses over into other genres, such as alternative rock, alternative metal, punk rock, post-grunge, pop punk and even Latin. The band's influences include Primus and Faith No More.