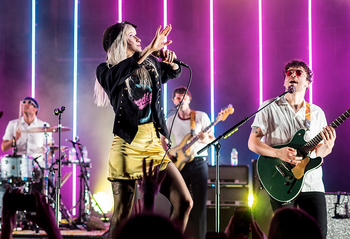 Basically, the music version of Two Guys and a Girl... with more guys included. Historically, musical groups have tended to be single gender. But there are cases in which a girl leads a band of guys, most often as the singer. Historically, such singers have sometimes been suspected to be mere mouthpieces for one or more of the men, but there are other cases in which she was definitely in charge. The girl can sing with Melismatic Vocals, a One-Woman Wail, Harsh Vocals or even be Cute, but Cacophonic. Often, the female singer is styled in an eye-catching and sexualised way, while the men are more utilitarianly clad, and the publicity photos and music videos will mainly feature her, sometimes to the point of completely omitting the men.

The Face Of The Band almost always gets invoked for every one of these bands with the female singer completely dominating the group and the men reduced to simply a backing band. Usually, she is the only member anyone can name or remembers from the group. See, Blondie, Garbage, Heart, No Doubt, Evanescence, The Cranberries, etc.

Among the Music Tropes, most common in Rock and Metal bands. Compare Two Guys and a Girl, The Smurfette Principle and Female Fighter, Male Handler for the non-music versions of this trope.

Note that the inverse is almost unheard of - there are very few bands with a male frontman and all female backing musicians, and in the few cases where it does occur the women are usually a live band backing a male solo artist, rather than members of a group.