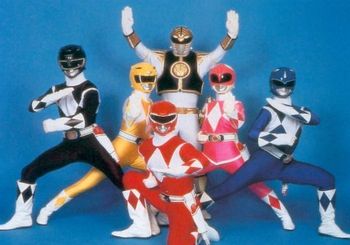 They wear masks because it's hard to pull this off with a straight face.
"Pose as a team, 'cause SHIT JUST GOT REAL."
— Problem Sleuth
Advertisement:

This is performed by a team, usually involving a high degree of synchronization or symmetry and often both. As the name suggests, the Super Sentai team (and the adapted Power Rangers) are the Trope Codifier and Trope Namer. Tends to look awesome, even if it should — by all rights — look silly. Generally speaking, you usually need three to six people to pull this off.

The trope originated with Sentai and is never played straight outside of a Sentai work; examples outside Sentai works are almost always Affectionate Parodies. Even within works, it's Lampshaded sometimes. For fun, this trope is usually coupled with In the Name of the Moon.

The Ur-Example and Trope Maker of the Super Sentai stance is the Japanese TV show Kamen Rider, where it has appeared as the "Henshin" (transform[ation]) stance since 1971, although older examples exist, such as the poses adopted by the numerous hosts and human forms in the Ultra Series when activating their Transformation Trinkets. In Japan, the stance is still known as the "Henshin pose" to this day. The Trope Codifier and Trope Namer is Super Sentai, which began in the '70s. It later became known to Western audiences in the '90s through the American Super Sentai adaptation, the Power Rangers, and several popular Japanese Anime shows including Sailor Moon and Dragon Ball Z.

Arguably the inspiration for the "dab" (or "dabbing") dance move in contemporary American Hip-Hop culture.

After being overwhelmed by ooze-men, the Rangers morph to give themselves the upper hand, complete with standard stances.

After being overwhelmed by ooze-men, the Rangers morph to give themselves the upper hand, complete with standard stances.