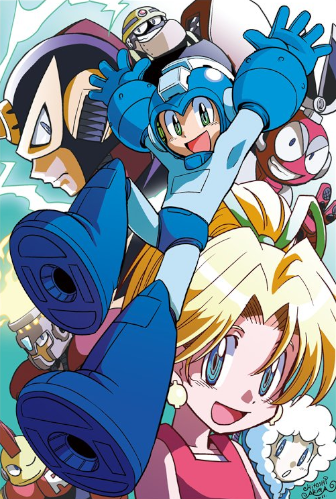 The fan favorite and oft celebrated adaptation of the classic Mega Man series by Hitoshi Ariga. Well known inside the fandom but never released in the West, it was originally known only to Japanese and the few Western fans that could afford to import it. Scans and translations of the original stories were available, but only of the first few chapters. A well known petition circulated for years, trying to get someone to pick up the series, but it seemed it was to no avail.

That is until publisher UDON announced that they would be bringing the series to the West. All three volumes were released, with the latter two including bonus content. For example: Volume 2 includes supplementary materials, like interviews with Kenji Inafune, Robot Master profiles, and comic strips based on the Soccer game (which are much less serious than the actual Megamix manga).

Megamix is known for its excellent storytelling, which also captures the feel of the Classic series while also telling it with a bit more depth and maturity. The theme of robot and human interaction is a big part of the story, and it can be heartwarming as well as action-packed.

Due to the success of Mega Man 9 and Mega Man 10, a follow-up to the series called Rockman Gigamix was released alongside a new print of Megamix, which collects the original stories while also adding new material by Ariga. UDON licensed Gigamix, and published all three of the new volumes as of November 2011. They were later reprinted