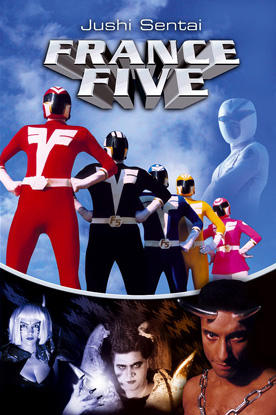 Glou Man Chou, ruler of the empire Lexos, desires to conquer planet Earth. However, the Eiffel Tower generates a barrier around the planet that keeps him from sending his armies en masse. Glou Man Chou sends his warriors and monsters to Earth in order to destroy the tower and enable a full scale invasion, but they are opposed by the France Five.

The series' fourth episode ended on a Cliffhanger with the fifth poised to be the Grand Finale. This was in 2005. Episode 5 was finally released online

In 2019, Maliki revealed she was part of the adventure as a storyboard artist and the artist of the "Where Are They Now?" Epilogue... and that she is working with the team on an audio episode with art to celebrate the 20 years of France Five. Said episode is an Interquel between episodes 3 and 4, and can be watched here