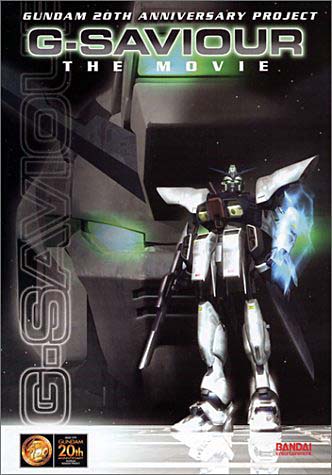 G-Saviour is a live-action Tokusatsu Made-for-TV Movie made as part of the Big Bang Project, celebrating Gundam's 20th anniversary, along with ∀ Gundam and a couple of video games such as Side Story 0079: Rise from the Ashes. A novelization, a PS2 game (which acts as a sequel), and an audio drama were released to tie-in with the movie's release in Japan.
Advertisement:

In Universal Century 223, the Earth Federation collapsed, leaving behind a vacuum of power in its demise. The Sides that were previously under Federation control became independent, calling themselves "Settlements". Two sides emerge for control over them: the Congress of Settlement Nations (CONSENT) which controls Sides 2, 3, 5, 6, and 7 and The Illuminati which controls Sides 1 and 4.

The movie is centered on Mark Curran (Brennan Elliott), a former CONSENT Mobile Suit pilot who finds himself fighting for the Illuminati when he was framed for the murder of a prison guard by his rival and former supreme commander, Jack Halle (John Lovgren) during a food crisis which has struck most of humanity. In addition, he must protect the only key to ending the crisis; a bioluminescent energy formula powerful enough to sustain plant life and create an agricultural breakthrough.

The titular mobile suit, and pretty much anything related to the movie didn't appear, or was mentioned, in any other Gundam media until 2013.

And in case you're wondering, this movie was made in Canada, not in the US.