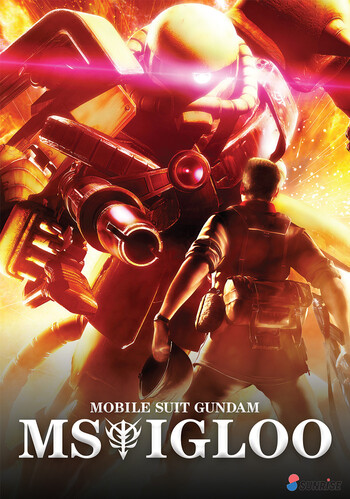 Wounded wings cannot fly.
U.C. 0079, at the end of the One Year War. The Principality of Zeon, seeking independence from the Earth Federation, has been repeatedly throwing newly developed weapons and mobile suits into the battlefield. At first glance they seem spectacular, but a cruel reality lurks in the background. The members of Zeon's 603 Technical Evaluation Unit field test the latest weapons and put new prototypes into action as the Zeon forces rush towards their final battle, and Zeon approaches the brink of defeat.
— U.C. Gundam Blu-ray Libraries blurb
Advertisement:

Mobile Suit Gundam MS IGLOO is a CGI Gundam feature which takes place during the One Year War. Three series have been released under the title, each one three episodes long:

The director of MS IGLOO is Takashi Imanishi (previously directed Mobile Suit Gundam 0083: Stardust Memory), and Yutaka Izubuchi is the supervisor. There is also a manga series, MS IGLOO 603, which started as an adaptation of The Hidden One Year War but later added its own content.