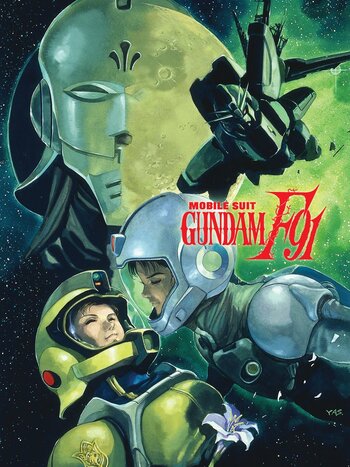 Pray, don't break our peace forever.
"From under our feet comes an attack from space..."
—Cecily Fairchild, aka. Berah Ronah.
Advertisement:

Mobile Suit Gundam F91 is a 1991 anime film, which was Gundam creator Yoshiyuki Tomino's attempt to launch a new Gundam saga, set thirty years after Char's Counterattack. He re-teamed with character designer Yoshikazu Yasuhiko and mecha designer Kunio Okawara for the occasion. The movie was first released in Japan on March 16, 1991.

Originally planned as a full-length television series, Gundam F91 hit a production snag due to staff disputes, and the project was stopped after the screenplays for the first thirteen episodes were written. It was then decided that what was made of the show would be condensed into a theatrical feature film. Predictably, condensing a story originally intended to be told over the course of thirteen half-hour episodes into less than two hours of screen time required much of the original story to be cut, and the results are generally regarded with mixed feelings.

Set in UC 0123, the story of Gundam F91 revolves around teenage space colonist Seabook Arno, his girlfriend Cecily Fairchild, and the efforts of the Crossbone Vanguard militia, led by Cecily's grandfather Meitzer Ronah, to establish an aristocracy known as "Cosmo Babylonia". In keeping with Gundam tradition, the civilian Seabook is forced by circumstance to pilot the F91 Gundam, coincidentally designed in part by his estranged mother, Dr. Monica Arno.

The Gundam F91 story was fleshed out in much greater detail in Tomino's two-part novelization. Tomino's manga, Mobile Suit Crossbone Gundam, is a direct sequel which takes place ten years after the events of the movie.

Given how none of the characters from the previous UC series show up and the considerably long time jump, it's apparent that (had it been a series) this would have been to be a Gundam equivalent of sorts to Star Trek: The Next Generation, perhaps even more so than Mobile Suit Zeta Gundam. As it happens, Mobile Suit Victory Gundam ended up being that equivalent, as well as Tomino's last shot at doing a late UC series.