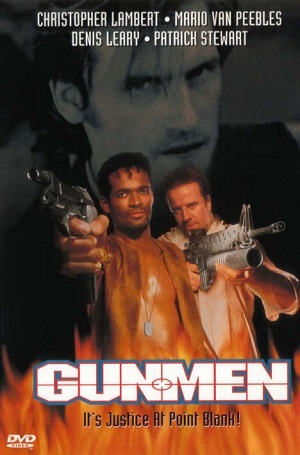 Gunmen is a 1994 action B movie starring Christopher Lambert and Mario Van Peebles.

400 million dollars are hidden on a boat by Dani Servigo's brother. His brother is killed and Dani is looking for that boat together with a DEA undercover agent Cole Parker. However, the drug boss, Loomis (Patrick Stewart) also sent his man Armor O'Malley (Denis Leary) to find the boat.

The plot follows that of The Good, the Bad and the Ugly and the characters are similar.