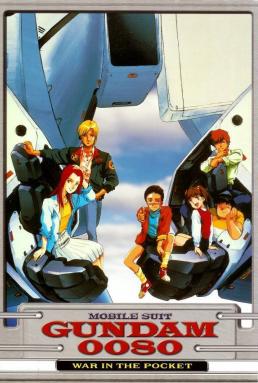 Can't you see that you are sweet?
Oh, let me love you so!
"Don't cry, Al. Soon there'll be an even bigger war with even cooler mobile suits!"
— One of Al's classmates.
Advertisement:

The first OVA of the Gundam franchise, Mobile Suit Gundam 0080: War in the Pocket is a six-episode series that offers a significant change from the standard Gundam formula. As suggested by its subtitle, War in the Pocket is a small, personal story; a side story focusing on the experiences of a eleven year old boy during the One Year War. Released in 1989, it served to commemorate Gundam's ten-year anniversary. It was also the first time anyone other than creator Yoshiyuki Tomino was given a chance to direct a Gundam story. That director was Fumihiko Takayama, an alumnus of Super Dimension Fortress Macross also known for helming the 1982 version of The Wizard of Oz and who would later work on Patlabor.

The story follows Alfred "Al" Izuruha, an eleven year old resident of a neutral space colony, as his home is drawn into the One Year War. Though supposedly uninvolved in the conflict, Al's colony is in fact home to a secret Earth Federation base, currently hosting the Super Prototype Gundam "Alex", which is undergoing final testing before being sent to White Base's Amuro Ray. A Zeon commando team is dispatched to destroy the Alex. During the mission, Al befriends the team's most junior member, Bernard "Bernie" Wiseman. A precocious kid who idealizes war (he's eleven, and this war happens to involve giant robots), Al is impressed with Bernie's (false) stories of being an Ace Pilot and general badass, and the two of them investigate the Alex as part of their ultimate plan to destroy it. However, unbeknownst to them, the Gundam's test pilot is none other than Al's attractive neighbor, and Earth Federation officer, Christina "Chris" Mackenzie. Also altering the situation is Bernie's awareness of his superiors' willingness to stop the Alex at all costs. The entire series follows Al's growing awareness of the reality of war as his two friends draw closer to an inevitable confrontation.

Although a Sunrise production (as are all Gundam series), one might call this anime an example of "Gainax Hills": Hiroyuki Yamaga, co-founder of Gainax and director of Royal Space Force: The Wings of Honnêamise, wrote the screenplay; character designs were done by Haruhiko Mikimoto, who had worked in the same capacity on Gunbuster as well as on Macross; and Takayama would direct an episode of Nadia: The Secret of Blue Water the following year.